For nearly 15 years now my bio has begun with words along the lines of my being a Lecturer or Senior Lecturer "in Composition at the University of Wollongong." Sadly, that is no longer going to be the case soon. Our program, Sound, Composition and Music Production, is to be cut. So passes one of the most innovative and egalitarian tertiary music programs in the country. We will be offered voluntary separation and made, and perhaps the word has more reverberations than just an industrial relations term in this case, redundant.

I have had a fear for a long time that the full time composer/academic was turing into a thing of the past. It seems the perfect model for the University of the future, in this country at least, is that each department be run by an administrator, who need not be a specialist in the area, and the teaching and research be done by limited-term, casual staff.

This reflects the direction that I believe universities are heading: toward the situation where they produce drones who have varying degrees of flexibility of thought, but no real specialist skills.

Universities, rather than leading social change, are responding to it. They are not looking to produce leading thinkers who can shape the future, but people who are able to read the changing societal winds and set their sails accordingly - the middle managers of the world who don't make policy but carry it out without questioning where we are all headed, or the wisdom of the powers that be - the career administrators. They will be the people who can do the most with the least amount of money and reflective thought.

That will be our future unless we do something about the dreadful way universities are funded and the staff are treated.

It may be that I am completely mistaken here, but I find it is so tempting to say, "Be seeing you!"
Posted by Houston Dunleavy at 3:43 PM 2 comments:

I'm approaching this with a little trepidation, and promise not to do this too often, but an otherwise nice little concert in The Australian Museum on Thursday night has left me a little troubled.

The Noise is a new string quartet, based in Sydney, that gave its debut concert in the TAM as part of Biodiversity Week. The concert was a series of improvisations based on issue arising from biodiversity. Simple enough, and a lovely idea when species are dying all around us and every extinction affects us somehow (just ask the beekeepers of the world).

The sound world the quartet inhabited was beautiful. The instruments were all amplified and connected to foot pedals which had some effect on the sound, so it all looked excitingly electronic. At the beginning, two of the instruments' sound failed, which made those of us in the audience who regularly use such things as electronics feel simultaneously sympathetic and smug.

The ideas the quartet passed around for improvisation were sophisticated and very well-structured, aided by mastery of the instruments they played. This was clearly an enjoyable adventure for them, and that proved infectious to the audience, which was larger than what one might expect at a concert of improvised music.

The little stone in my shoe here is the fact that this concert was presented as a bit of a ground breaker - part of the avant garde. If so, then it is pleasing to note that the avant garde has at last caught up with what many of us have been doing for 20 or 30 years and what I, for one, have been teaching for the past 15. The ideas seemed to be manipulated by some traditional techniques such as imitation, retrograde, inversion etc. so not a lot to add there.

However, even with that in mind, it was a successful night of music making, in a way that was new to the players and, I'm sure, a few of the audience. There was a goodly gathering of composers and improvisors in attendance, and perhaps their response to the premise of the evening is a little different to mine - a little more generous maybe. However, it is hard to get around the fact that this sort of music making is not the cutting edge that it seemed to want to be, or the dark suspicion that because it was being performed in the big smoke of Sydney, rather than, say, the hick towns around it, like, say Wollongong (grin), it now had some form of legitimacy in Australia.

None of this will stop me going to hear further concerts by this group though, as there is so much potential for great music making here. I will watch them grow with great pleasure and help when asked.
Posted by Houston Dunleavy at 1:39 PM No comments:

The start of a new adventure!

This evening is the first presentation of an excerpt from the new opera The Pea Pickers by Maltese-Australian composer (and sometimes doctoral student :-) Jeff Galea, with a libretto by Bonnie Cassidy. It is based, of course, on the Eve Langely book of the same name, published in 1942. It shouldn't be confused with Ivy Getchell's The Pea Picker's Daughter, published last year.

My role is to conduct - to wave my arms in time to the music until it stops, then turn around and bow - while the small ensemble and singers' role is to perform the opera in spite of the conductor.

I conducted Jeff's previous opera Wounding Song, (I believe I suggested the title) back in 2008 at the Illawarra Performing Arts Centre with a cast of University students and a mostly professional orchestra. This work is quite different. It has no Maltese folks elements, but it does draw, in one scene, on a kind of reel which features the violin - it's not quite Irish, but you can smell the potcheen.

There are three singers, Lotte Latukefu, Jane Sheldon and Mara Davis, whose voices are all completely different and add texture to the characterisation. All three are fine musicians, which is a joy to find in a singer with a great voice. The ensemble of violin, guitar, 'cello and electronics are terrific to work with too - all of them being quite flexible and willing to do a great job. An added bonus for me is having Laura, my dear wife, as electronics monkey, which satisfies two of her cravings - music making and playing with gadgets
:-)

Jeff's music is very singable, despite the opening tritones for the soprano! His harmonic language is very assured and he is, as the late Andrew Foldi would have described him, a true "man of the theatre", in that he is wiling to change things to make them work dramatically and musically: in opera, the are often the same thing of course.

When the smoke has cleared from this evening, I'll write a little about the music and my thoughts about it - right now is not the right time, as I'm about 10 hours away from performing it! Straight after the performance, I'll be attending a concert by the new string quartet "The Noise" at The Australian Museum. It seem like every interesting composer/friend is going to be there tonight. It should be a blast.
Posted by Houston Dunleavy at 8:57 AM No comments:

And While I'm the subject...

This is the program for a concert today in Taipei at the Yamaha Artists Centre. 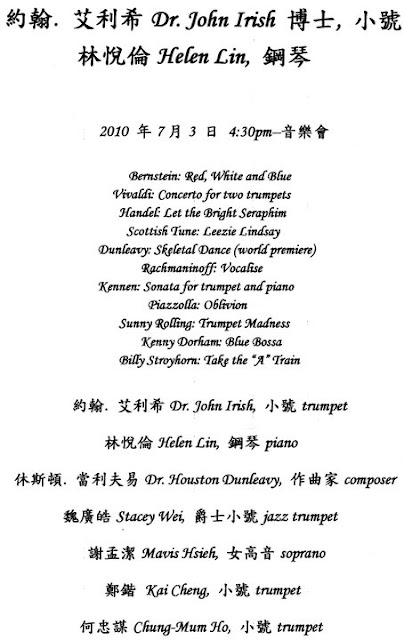 Read more »
Posted by Houston Dunleavy at 8:55 AM No comments:

Just thought you might want to know about this one. It's the first of two performances of this program, the second being in Adelaide on 4th August.

This is Melanie's Masters recital program, based on her thesis "Australian Flute Music of the past 25 years"

Posted by Houston Dunleavy at 4:23 PM No comments: