It's good to have great friends! 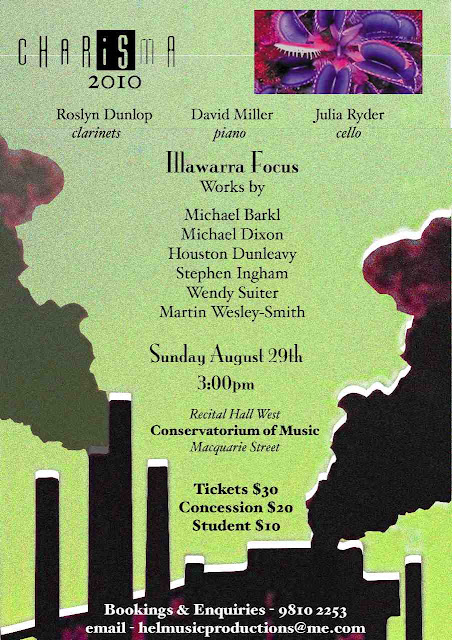 A great concert by Charisma celebrating the composers of the Illawarra and mourning the demise of the composition program. There was music by Stephen Ingham, Michael Barkl, Wendy Suiter, Matin Wesley-Smith, Michael Dixon and yours truly. All beautifully, passionately played, with a deep understanding of the requirements of each of the styles required by each piece.


The Sound, Composition and Music Production program is, and I'm not the only one to say this, one of the most innovative and egalitarian programs around, and the three full time academic staff members who have guided this program for nearly 10 years, and who have about 75 teaching and research experience between them, will be probably made redundant at the end of the year. This not only throws their lives into some form of chaos, but particularly the lives of their postgraduate and, to a lesser extent, undergraduates students.


The reaction to this, form all over the world, has been one of shock and dismay. This department was world-renowned and the centre of, among other things, studies in alternative tuning and innovative compositional pedagogy.


How did this all happen?


I'll be as brief as possible here, partly because it grieves me greatly to go over this stuff.

Simply, the Sound, Composition and Music Production program was recommended to be closed and to take no more students after this year as part of a routine review into the Faculty. It would be taught out by the end of 2012, with a new program, goodness knows what, coming online either at the beginning of 2012 or, more likely it seems now, at the beginning of 2013. All the composition staff are to be offered voluntary separation, leaving one to wonder how the program will be taught out and how the large number of postgraduates will be looked after to completion. The University will not re-hire any of us back after voluntary separation due to taxation issues.

It's worth noting that he review suggested a number of inaccuracies about the nature of the program, and said that they would prefer 40 students per year level, when only 25 can fit in a classroom, there was no more teaching load room for current staff and extra casuals would not be hired. So, the easiest thing to do, which would also save the Faculty the amount of money it had as a shortfall in its budget, was to cut the program and get rid of three senior academics, myself included.

So marks the of the serious study of music in any form in any defined way at the University of Wollongong. None of the existing senior staff has been asked to contribute to a future program, and, in fact, the University has made it clear by offering Voluntary Separation at this stage (which, if it is refused, will only result in forced redundancy at the end of 2011 for all concerned - before the new program comes online) that it doesn't want the existing composers to be involved in anything new.

Time to look for work!

Posted by Houston Dunleavy at 9:50 AM No comments:

Last night I started a new chapter in the adventure of being a musician. I went to my first rehearsal of the Sydney Male Choir, as its new Musical Director. I take over after the 12th September, when the choir performs its final official concert under the direction of Alan Thrift (who has been the Musical Director for 20 years!) at the Sydney Town Hall as part of the 11th Annual City of Sydney concert.

This appointment, along with a couple of other affirmations, makes up a lot for the sting of being made redundant from my University position. I am very excited about the choir and its possibilities. The members have been tremendously welcoming and its very exciting to have an accompanist of the calibre of Eleanor Gair to work with. The choir is looking to expand its repertoire into Australian music as well as build on its already impressive sound and audience base. I'm am looking forward to this very much!

In other news, Laura's and my opera based on her story "The Dancing Mice and the Giants of Flanders" now has a couple of scene finished and worth being shown around. The story, which is included in the anthology Masques is a beautiful and slightly disturbing fairy story set in Flanders and celebrates the cultural life of that part of France and Belgium, particularly the giants that are the emblems of the local communities.

For an introduction to the giants as they are celebrated today, her's a great little video, despite the rather "stuffed shirt" style of narration:

More about the details of the opera as they come to hand, but we are starting on a very long and exciting journey with this one!
Posted by Houston Dunleavy at 9:04 PM No comments: