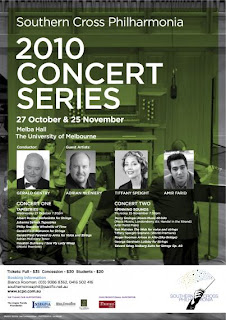 On Wednesday 27th, my string orchestra piece, I Saw My Lady Weep was premiered in Melbourne by the Southern Cross Philharmonia. Conductor Gerald Gentry is a champion of Australian music and it's amazing to have a conductor who has such breadth on knowledge and musicianship interpreting your piece for a first performance. This is a conductor who worRalph Vaughan Williams, Roberto Gerard, Elizabeth Lutyens, Sir Arthur Bliss, Samuel Barber, John Ireland, Andrzej Panufnik, Percy Grainger  and Paul Hindemith The young players of the orchestra have a superb sound and are technically very good. It's a great pity this is not more than an "occasional" ensemble, as Gerald would be able to build a superb sound and ensemble sense form such great talent.
My piece, which was originally a string quartet written for the Scottish Chamber Orchestra String Quartet at the 1995 Hoy Composers' Course, run by Sir Peter Maxwell Davies, is based on the opening notes from John Dowland's song of the same name found in his Second Booke of Songs or Ayres (1600), which I first sang when I was about 15 or 16 in a concert, in full Elizabethan costume! I had been searching for a way into the work - an emotional entry key if you like - while under the pressure of having to try to compose the piece in less than a week. After three failed attempts to start the piece from a purely technical, sonic point of view, I finally found what I was looking for when, unbidden, a memory of the first time I saw my wife, Laura, cry, same to mind.
The piece just flowed like tears (another Dowland reference for those of you who are counting) and the piece was completed in a real heat of industry. It's ten minutes long and took only five days using pencil and paper! It was so long that it caused Max to question whether or not I'd written it beforehand or not. However, there were plenty of witnesses to the contrary, so the piece went ahead. Afterwards, the players suggest that it would make a good string orchestra piece and, after 14 years of waiting (I converted it to a piece for String Orchestra in 1996) Gerald and the SCPO proved them right.
What was deeply satisfying to me about this work is that the complex counterpoint and deep emotion work very well together. It is a big wall of sound for a lot of the time, balanced by some very delicate and tiny sounds. Juxtaposition rules supreme, as it did for a lot of my music from the 1990's, and it still seems to hold up, 14 years after the event!
My deepest thanks to the Southern Cross Philhramonia and, most especially, Gerald Gentry for, as he says, championing Australia music!
Posted by Houston Dunleavy at 8:22 AM