Sydney Male Choir at the Basketball!!

I had a great time on Friday night! The Sydney Male Choir, whom I have the honour of conducting, debuted at the Sydney Entertainment Centre singing the National Anthem and two other pieces (including a version of "The Saints Go Marching In" which was re-titled "When The Kings Go Marching In") as both warm-up and halftime entertainment for the Sydney Kings basketball in front of 9,000 people. The Sydney Kings Lion and announcer, Rodney O, joined in the latter, much to everyone's delight. It was a serious blast for everyone involved! Dignitaries and high fives everywhere! 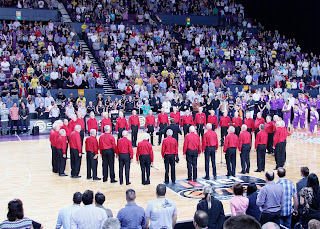 This image is the choir singing the National Anthem. A terrific night for all of us, and plenty of "you have to come back" remarks. The Premiere of NSW, Barry O'Farrell even said, "You Were Good!" I wonder is he's going to be Minister for the Arts in the new state government?

So the lads go marching form strength to strength. It's going to be a great year!
Posted by Houston Dunleavy at 8:53 PM